Every Friday, we spotlight a past Joci Awards finalist and find out what they’ve been up to since performing in the annual competition, learn what the future holds for them, and ask them to dish sage advice to future competitors. Look for a new finalist spotlight every Friday, and if you know of a past winner interested in being featured, contact us here. 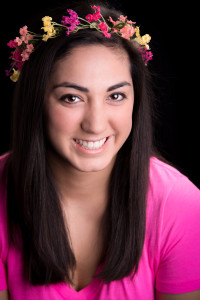 First, tell us what year, category, song/piece, etc., you performed at the Joci Awards. In 2015, I performed in the dance category. My piece was a tap number to “America” from the musical West Side Story.

What are you up to now? Are you in school? Working? I attend Sam Houston State University as a Musical Theatre major. I’m enjoying my freshman year at SHSU and am so thankful for the opportunity to study what I love! I was cast as a phantom (dance ensemble) in Sam Houston State’s musical production of Rocky Horror Picture Show and had the most amazing experience rehearsing, performing, and bonding with my fellow cast members.

What are your plans for the future? After graduation, I would love to gain experience by performing on a cruise ship for a year. Then I would like to move to New York City and audition for Broadway shows and tours. After several years of performing, I would be interested in working with young children, teaching them about the arts and directing/choreographing musical productions.

Tell us about your Joci Awards experience. What was it like performing on stage of the Empire Theatre? Any other fun memories that stand out? I had a fantastic time performing at the Joci Awards! I already knew some of the finalists, but it was great to get to know the others. One of my favorite things about the experience was exploring the beautiful Empire and Majestic Theatres. Also, I enjoyed getting to hang out and play games with other finalists prior to the competition. It was so much fun to talk to these incredibly talented people who were passionate about the same things I’m passionate about. Performing alone on the stage of the Empire Theatre was overwhelming yet amazing. I had the chance to do what I love alongside my friends and in front of an audience that was extremely supportive!

What advice do you have for future scholarship applicants and Joci Awards performers? I would encourage applicants to work hard and polish their pieces in order to feel completely confident on audition day. During the actual performance, they should just have the time of their lives and take in every little detail of the experience as they will want to remember it forever!

Your support funds our educational programming, which includes the Joci Awards, Las Casas’ annual scholarship competition where $100,000 is awarded each year, Behind the Scenes, Camp Broadway, and more.