Every Friday, we spotlight a past Joci Awards finalist and find out what they’ve been up to since performing in the annual competition, learn what the future holds for them, and ask them to dish sage advice to future competitors. Look for a new finalist spotlight every Friday, and if you know of a past winner interested in being featured, please contact us here. 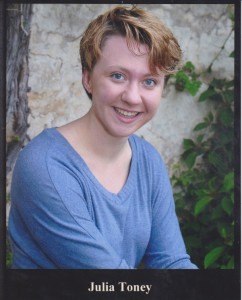 Tell us what year and category you competed in the Joci Awards.

I was in the 2015 Joci Awards in the Acting category. I performed a monologue from The Hanging Women by Donna Spector.

What are you up to now? Are you in school? Working?

In the summer of 2015, I worked as an assistant for Camp Broadway at the Empire Theatre. I received this job because of my connections I made at the Joci Awards, actually! Currently I am working on my degree in Theater Performance at the University of Evansville, learning not only acting, but play-writing, costuming, stage make-up application, set-building, and more.

What are your plans for the future?

Generally, my plans for the future include completing my college education and working every single summer. I want to pick up internships and jobs in the theater when I can, definitely. My sophomore year of college I plan on studying abroad at Harlaxton College in England, Evansville’s sister school.

Tell us about your Joci Awards experience. What was it like performing on stage of the Empire Theatre? Any other fun memories that stand out?

Performing at the Empire Theatre was just fantastic! It was incredible to see the audience so closely on that stage, and the theater itself was gorgeous in gold. It was wonderful and refreshing to meet so many other people as interested in theater as me in the competition. Also, working at Camp Broadway was so fun during the summer, meeting such talented kids and working with sensational people!

What advice do you have for future scholarship applicants and Joci Awards performers?

Take work where you can get it, honestly. To continue in theater, one has to be easy to work with, driven, and (preferably) adept in several areas of expertise. Be kind, be open, and you will succeed.